We give a lot of attention to our chakras when we deal with energy work. That’s because the chakra system is a major structure in the anatomy of our energy field.  The seven major chakras are energy centers that metabolize life force energy nourishing different regions of the body and spirit. When a chakra’s energy flow is disrupted it often begins to effect the physical body in that region.  For example, in my practice I will often see people with second chakra issues (located two inches below the navel) present with chronic constipation, low back pain, depression, fatigue, irregular menstruation or hormonal imbalance.

Once it’s been identified that a chakra or the entire chakra system needs some work then it becomes a question of the appropriate way to treat it energetically. In the holistic or new age community, the ideas of aligning, balancing and clearing the chakras can be thrown around a lot and can seem like they are all terms that mean the same thing. I’d like to take this time to talk about how each of these are very different and used in different situations, based on my knowledge of perceiving the energy field through intuitive work and treating with gemstone energy medicine.

Hearing about clearing the chakras is pretty common, but what does that mean? Cleared of what? When I intuitively look at the energy field and at the chakras sometimes I see a misty like grey smog with little particles floating around in it. It’s like an accumulation of energy of excess energy.

What causes this accumulation? In my experience lots of different things:

I once had a client who I had seen for multiple sessions and therefore had gotten accustomed to the look and feel of their energy field. But one day I was surprised to see grey smog all around their body and chakras. Intuitively I got the impression that something changed in their lifestyle that had been helping keep her body clear and energized, along the lines of exercise, yoga or meditation. My client then confirmed that they indeed had not been following their regular exercise routine recently.

The best example of this is most often seen around the head and brow chakra (center of the forehead) from an excess of mental energy. Mental exhaustion from too much thinking, planning, organizing and analyzing, which is very common in modern day life.

It’s my experience when someone is dealing with an emotionally charged situation in life and they choose to ignore their feelings or hang on to certain feelings without letting go, energy begins to slow down around a chakra and accumulate.

There are other times when an accumulation can originate from another person. When negative mental and emotional energy is directed at a person from someone else. At times this can also suggest an issue of boundaries or feeling the need to be responsible for other’s emotions, actions and problems.

In my practice using gemstone energy medicine, there are a couple different gemstones I use for clearing energy.  White beryl is one I use specifically for the entire chakra system from crown to root as well as using it within the aura.  Sugilite is another useful gem that is like a vacuum for energetic pollution. Sodalight is excellent at clearing accumulations of mental and emotional energy, particularly if it’s coming from an outside source.

Balancing the chakras, another really common practice. The way I see chakra imbalances is by getting a sense of the size and flow of the chakras.  Chakras look like funnels, they come off the body a couple of feet starting out larger at the top and smaller as they reach and enter the body. An imbalanced chakra can be noticed when the funnel looks excessively wide or narrow and the flow can be rapid or slow. If we consider something like chronic fatigue, depression and constipation you can often find a correlation in the second chakra with energy moving at a slow pace and/or the funnel of the chakra being very narrow.  In contrast, when I’ve done intuitive readings I typically can tell if a woman is pregnant just by the feel of her second chakra. Usually the chakra seems big, very bright and moving quickly.

Quartz is excellent for encouraging balance. I use white quartz on the chakras for balancing by either placing one chakra poultice on each chakra at the same time or using a therapeutic quartz necklace on the each chakra for the same duration of time starting at the root, three minutes per charka for example.

Rose Quartz placed on the front and back aspect of a chakra at the same time (example: heart chakra at the center of chest and opposite side on the upper back) can balance and harmonize the function of a chakra. 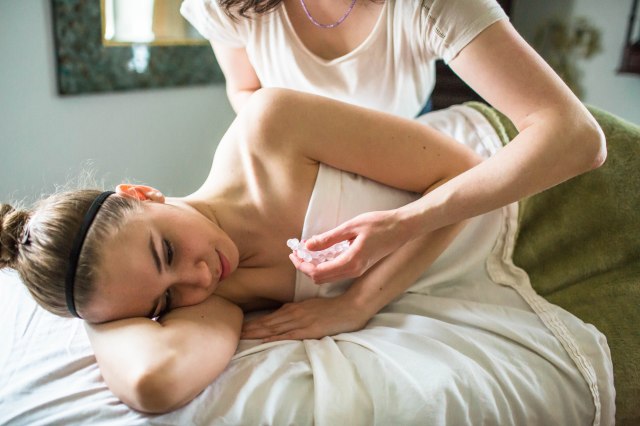 I also use a specialized tool in my practice called a gemstone color ray mandala. It’s a circular piece of beeswax attached to a handle that has a gemstone for each color ray that is used to boost and balance the energy of the chakras.

I think a majority of people have heard of “aligning your chakras.” It’s been the source of many jokes poking a bit of fun at holistic practices in the media. Chakra alignment is the location of the chakras in relation to each other. Ideally, each chakra would be perfectly aligned centered to the body. One example of me seeing a chakra out of alignment in a session was with a client who I perceived as having their stomach chakra moved over to their right side. It’s important to note the stomach chakra is all about our personal power, issues and relationship to self, self-empowerment and self-care. The more I tuned in, I realized this client was taking issues concerning self and “putting it off to the side” so excess energy accumulated on the left side of the body to the point that it pushed the stomach chakra off toward the right.

I will also say in working on myself, receiving a session from a seasoned energy worker and mentor, I was told at one point I was holding my sacral chakra “back and up.” The sacral chakra is about our relationship with others and our environment. This chakra deals with issues of personal relationships, sex, reproduction, creativity, money and work. At that time I was in a sense holding myself back out of fear which is why the chakra had moved to that position.

I am a Licensed Massage Therapist, Certified Gemstone Energy Medicine Practitioner and trained Intuitive located in Saratoga Springs, New York. In my practice. I specialize in helping clients manage and alleviate their anxiety, depression, fatigue, chronic pain and stress through blended sessions of gemstone energy medicine and massage therapy.

I am passionate about sharing my knowledge of the benefits of massage, the connection between intuition and energy of the body and educating about the effectiveness of therapeutic gemstones.  In my blog. I try to share interesting and insightful information about how therapeutic touch and energetic attention can transform health and wellness.  I hope you enjoy reading and find information to help you in your own path and growth.